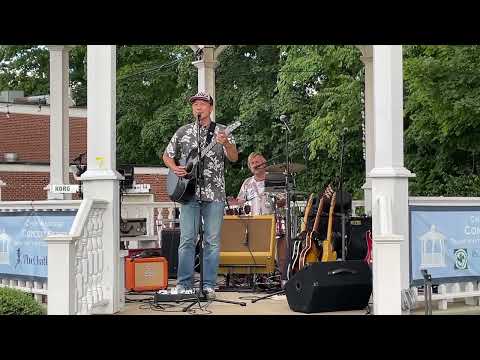 I played a solo set of Hawaiian music before the John McDermott Band jammed their 1960s rock and roll revue. The weather was perfect — no humidity — before a warm Chatham crowd.

Cool story. During sound check, I played the opening guitar lick of Island Style. Lincoln, the John McDermott Band drummer sitting behind me, asks, “Is that John Cruz’s Island Style — he and I were in a band together at Amherst.” Lincoln joined me adding his bongo drums and harmonies. The impromptu duet was captured by keyboard player Greg Gruber.

The concert series at the Reasoner Park gazebo is free to the public and takes place on Thursdays at 6 p.m. Residents are encouraged to bring food, blankets, and lawn chairs. It’s a great opportunity to support our local restaurants and makes for a fun evening for the entire family.